Mark the letter A, B, C, or D on your answer sheet to indicate the word whose underlined part is
pronounced differently from that of the rest in each of the following questions. 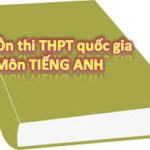