It is often said (A) that the British talks (B) about the weather more than (C) any other people (D) in
the world.

Question 3:
The (A) girl whom (B) I borrowed the dictionary asked me to (C) use it carefully (D).
Question 4:
Have (A) the members of the club be told (B) about the changes (C) of their timetable (D) yet?
Question 5:
Rhonda is not (A) very keen about (B) foreign food (C) and fast food (D) as well.
Read the following passage and mark the letter A, B, C or D on your answer sheet to indicate the correct answer to each of the following questions.

The year 1850 may be considered the beginning of a new epoch in America art, with respect to the development of watercolor painting. In December of that year, a group of thirty artists gathered in the studio of John Falconer in New York City and drafted both a constitution and bylaws, establishing The Society for the Promotion of Painting in Water Color. In addition to securing an exhibition space in the Library Society building in lower Manhattan, the society founded a small school for the instruction of watercolor painting Periodic exhibitions of the members’ paintings also included works by noted English artists of the day, borrowed from embryonic private collections in the city. The society’s activities also included organized sketching excursions along the Hudson River. Its major public exposure came in 1853, when the society presented works by its members in the “Industry of All Nations” section of the Crystal Palace Exposition in New York.

The society did not prosper, however, and by the time of its annual meeting in 1854 membership had fallen to twenty-one. The group gave up its quarters in the Library Society building and returned to Falconer’s studio, where it broke up amid dissension. No further attempt to formally organize the growing numbers of watercolor painters in New York City was made for more than a decade. During that decade, though, Henry Warren’s Painting in Water Color was published in New York City in 1856-the book was a considerable improvement over the only other manual of instruction existing at the time, Elements of Graphic Art, by Archibald Roberson, published in 1802 and by the 1850’s long out of print.

In 1866 the National Academy of Design was host to an exhibition of watercolor painting in its elaborate neo-Venetian Gothic building on Twenty-Third Street in New York City. The exhibit was sponsored by an independent group called The Artists Fund Society. Within a few months of this event, forty-two prominent artists living in and near New York City founded The American Society of Painters in Water Colors
Question 6: This passage is mainly about____________.
Question 7: The year 1850 was significant in the history of watercolor painting mainly because____________.
Question 8:
The word securing is closest in meaning to____________.
Question 9: All of the following can be inferred about the Society for the promotion of Painting in Water Color EXCEPT___________. 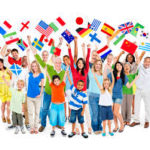 What is a coincidence?

A coincidence is a surprising thing that happens to us. For example, you and a friend both go shopping on the same day. You don’t go together and don’t discuss your shopping plans in (21) ______, but when you meet up afterwards, you are amazed to discover that you’ve bought an identical T-shirt.

In reality, life is (26) ________of coincidences, but normally we don’t notice them. For example, in almost fifty percent of all football matches, two players share the same birthday. This seems surprising, (27) ________ that there are 365 possible birthdays in the year. But most of these matches will be played without anybody being (28) _______ that coincidence exists. (29)________your birthday is today, you don’t generally tell people about it. In addition, without realising it, you probably (30) ______ into contact with lots of people who were born on the same day as you. But when a coincidence brought to your attention, it still seems amazing.

The observation of the skies has played a special part in the lives and cultures of peoples since the earliest of times. Evidence obtained from a site known as the Hole in the Rock, in Papago Park in Phoenix, Arizona, indicates that it might have been used as an observatory by a prehistoric people known as the Hohokam.

The physical attributes of the site allow its use as a natural calendar/clock. The “hole” at Hole in the Rock is formed by two large overhanging rocks coming together at a point, creating a shelter with an opening large enough for several persons to pass through. The northeast-facing overhang has a smaller opening in its roof. It is this smaller hole that produces the attributes that may have been used as a calendar/clock.

Because of its location in the shelter’s roof, a beam of sunlight can pass through this second hole and cast a spot onto the shelter’s wall and floor. This spot of light travels from west to east as the sun moves across the sky. It also moves from north to south and back again as the Earth travels around the Sun. the west-to-east movement could have been used to establish a daily clock, much like a sundial, while the north-to-south movement could have been used to establish a seasonal calendar.

Many women faced hurdles in the business world especially problems in raising money.

Extracurriculum of my school offers a variety of interesting clubs, among which I want to take part in English club the most because of the following reasons. First of all, joining an English club help me to indulge my passion for this language. I love exploring the English culture, tradition and art, and it is undeniable that club activities can assist me a lot. Moreover, as English has become increasingly important in modern global society, it is advisable to join this club because it gives me an opportunity to learn English through a diversity of activities like sharing, discussing, talking,… Last but not least, participating in the English club can help me to make friends with people with the same interest. We can help each other not only in the process of improving our language but also in normal life. In conclusion, I love the English club at my school and think that it is extremely beneficial.